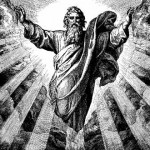 (To the little, pitiful God I make my prayer,
The God with the long grey beard
And flowing robe fastened with a hempen girdle
Who sits nodding and muttering on the all-too-big throne
of Heaven.)

Years later, my mother asked me, in a telephone conversation, if I remembered Immaculate Conception, the church where I’d been confirmed, and the priest who’d administered those rites. “I remember the sister who taught my catechism more than him,” I said. “She was evil.”

“Well, not as evil as him, apparently. He’s been accused of abusing some of the boys. You know”  – her voice dropped to a whisper – “sexually.”

And I thought: well. That explains a lot.

I was in my early twenties by then, and it had been a couple of years since I’d been to Mass. Religion was the opiate of the masses, Marx had taught me, and my mother had gone ahead and confirmed what he and Machiavelli and Nietzsche and the kids in the parish of Immaculate Conception – and, we would someday learn, parishes everywhere – already knew: that religion sometimes gives very bad people an opportunity to very bad things, and to get away with it. So I abandoned religion, mostly entirely.

By my early thirties, I was trying to get it back. Or, rather, I was trying to figure out whether I should get it back. I had loved God, and the Catholic Church, for a long time, before the unpleasantness of Immaculate Conception, and, later, my parents’ separation and divorce and mutual crisis of faith (another story entirely, although not one, perhaps, that is mine to tell). I missed them, sometimes. And I worried, sometimes, about how I would navigate the waters of faith once I had my own children; how I would raise them to have faith, if I wasn’t – if we weren’t – at home in the Church. Because I knew that I wanted them to have faith. I just wasn’t sure how, and on what terms. I struggled to figure out how to renegotiate my relationship to God and to faith. And even though I told myself that I wanted to explore faith in all of its forms and consider all options, I have, deep down, always assumed that if I returned to church it would be to return to the Church, the Catholic Church.

I had sort of thought – this year after my father’s death, this year during which we need so much prayer for my nephew – that I might, this year, return for Easter. But then the Catholic Church went ahead and screwed it up and put me off religion, again.

(What a long, long time, dear God, since you set the
stars in their places,
Girded the earth with the sea, and invented the day and
night.
And longer the time since you looked through the blue
window of Heaven
To see your children at play in a garden…)

Allegations of abuse within the Church are not new, of course. But it’s not the allegations – the fact – that abuse occurred (horrifying as that is) that are destroying the remnants of my faith in the Church: it’s the Church’s refusal to take responsibility for it. It’s the Church’s refusal to admit that mistakes were made, that it failed to protect children. It’s the Church’s inability to be humble, to acknowledge that the failure to protect children was a human failure, one made within the Church, by the Church, and that it let God down. That it let us down – that it let the children down – is obvious. That it claims now to have God on its side, that it claims to be on the side of what is good and right, and that it insists that all those who express horror at what it allowed to happen are agents of persecution who are needling them – and by extension, God – with their evil accusations and petty gossip is a travesty of such magnitude that I have trouble, in some moments, even believing that it’s happening. It reads like the plot of a bad conspiracy-themed action novel, wherein robed men give booming speeches about Protecting God’s Church At All Costs while minor henchmen destroy documents and arrange for naysayers to be ‘disappeared.’  Somewhere, Dan Brown is taking notes, furiously.

This is all so appalling, so terrible, because the Church’s refusal to take responsibility for the horrors committed on its watch and its refusal to take responsibility for not addressing and eliminating those horrors when it could makes it seem as though, in the words of my young fellow catechumen, “God doesn’t really care about what those guys do.” When the Church insists that the reputation of the Church is more important than the well-being of innocents, when the Church puts the Church first and insists that this is what God wants it to do, God is on its side, if you criticize it you criticize God and also Jesus and all the saints and probably your grandmother, too, well, it sets itself up as the earthly representative of a God that no good person should want to follow. And in so doing, it destroys faith. Or, at least, it shakes it really violently.

(Now we are all stronger than you and wiser and more
arrogant,
In swift procession we pass you by.
“Who is that marionette nodding and muttering
On the all-too-big throne of Heaven?
Come down from your place, Grey Beard,
We have had enough of your play-acting!”)

The more reasonable explanation, of course (assuming, that is, that you believe in God), is that the Church is not representing God. Or that the men who are running the Church, and the men responsible for not purging the Church of the sickness within it, are neither representing God nor the Church as it was meant to be, whatever that ‘meant to be’ was supposed to be, or whatever. But for Catholics, no such distinction can be easily made. The men of the Church are the Church; the Pope is its head and the direct line to God. And so if we accept, as the Church claims, that God is on their side, then we are left, again, with the lament of my young peer, a young man, a child, who was almost certainly abused: “God doesn’t really care about what those guys do.”

I refuse to believe that. I believe, instead, that the Church has failed, or, rather, that those who defend the institution of the Church over and against its most vulnerable members have failed. I believe that this failure stands as evidence that this Church, which is to say these men, cannot speak for God. That no man – or woman – can speak for God. And that the only possible demonstration of faith in the face of everything that has happened is, I think, to turn away, to refuse to listen, to deny their authority to speak, to disavow belief in their claims about God, their God, and to believe in another God entirely. One that makes sense. One that does care about ‘what those guys do.’

Who or what that God is, I don’t know. And I don’t expect that that God can make any of this better, or make any of this make sense, or do anything to make the ugliness in the world – including the ugliness being propagated by the Church, who would deny the depth and breadth of that ugliness as it pertains to them – anything less than what it is. But I need to believe in a better God, and in a better kind of faith, whatever that means.

(It is centuries since I believed in you,
But today my need of you has come back.
I want no rose-coloured future,
No books of learning, no protestations and denials–
I am sick of this ugly scramble,
I am tired of being pulled about–
O God, I want to sit on your knees
On the all-too-big throne of Heaven,
And fall asleep with my hands tangled in your grey
beard.)*

*(To God The Father, by Katherine Mansfield)

Postscript: I mean no offense to Catholics who are comfortable remaining in the Church. I understand how it is possible to distinguish between the Church – which, as one commenter has noted, might better be identified with the people of Catholic faith, rather than with the Vatican or with the men who claim to speak for God – and its representatives in the Vatican and elsewhere. I’m struggling with that, because I know that the Church is full of good, good people. I just know that, so long as ‘the Church’ – which is to say, again, its representatives – disclaim the proven horrors as their responsibility, and disdain the seriousness of what happened, I cannot imagine supporting it/them in any way.

We, Who Need Such Great Mysteries