Ashlee Simpson and Me

Today, the universe told me this: Ashlee Simpson got a nose-job.

More specifically, Ashlee Simpson went on record in Marie-Claire magazine as supporting quote-unquote real beauty and said things to the effect of “everyone is made differently and that’s what makes us beautiful and unique” and helped some inner-city teenage girls make a mural celebrating real beauty while pumping her fists in the air and hollering “what tough mother-fucking bitches we are!” and just generally getting all hopped up on girl power – and then trotted off and had her nose done.

And, consequently, brought something of a shit-storm down upon her surgically-altered head.

The shit-storm came in the form of, reportedly, some thousand outraged readers of Marie-Claire, who opened their ‘real beauty’ issues of the mag after Ms. Simpson the Younger revealed her new, better, altered face. Such was the shit-storm that the new editor of Marie-Claire (who was not editorially responsible for the Simpson spread) allowed extra space in the latest edition of the mag for reader letters addressing that matter and stated, on behalf of the magazine, that “we’re dazed and confused – and disappointed – by her choice too!”

I’m not going to address questions concerning the hypocrisy of a fashion magazine – no matter how “progressive” that mag – criticizing a celebrity for fiddling with her appearance. Whatever. Marie-Claire has sniffed the armpit of the girl-power market and is going after it. Great. Better than going after the aspiring Pussycat Doll market. But still. It’s a fashion magazine. It sells Maybelline (maybe she’s born with it… maybe not!)

I don’t care all that much about whether fashion magazines grow social consciences. I don’t read them for their social conscience (in fact, I’d say that the more socially pious such a magazine gets, the less likely I’d be to read it.)

What I do care about: asking to what extent beauty is socially constructed and figuring out how to shield my daughter from the more pernicious aspects of that social construction. No, I’m not going to do that math here. (Yes, I felt that massive, collective sigh of virtual relief.) What I need to do here is figure out why and how such ideas about beauty matter to me. Figure out why that Ashlee Simpson story hit me in the gut.

To that end… onward to the cliffs of HBM’s psyche!

I have always hated my nose. In sixth grade, some ass named Donald nicknamed me ‘Big Nose’ and it stuck. That nickname had run its course by the time I entered seventh grade, but still, that year of rhino-mockery stayed with me. For years I did everything that I could to avoid being seen in profile: my hands fluttered constantly near my face, and I was ever pulling my hair down over my cheeks as a veil.

As I got older, I relaxed a little about my nose. Sometimes, when I was feeling dramatic and confident and having a Diana Vreeland moment, I even liked it. But mostly not. Mostly, I thought, I’m smart and funny and maybe sort of pretty, or at least, I might be sorta pretty, if it weren’t for the nose…

And then I’d beat myself up a little for obsessing about my nose. Because, you know, cool girls don’t do that. Cool girls don’t care. Cool girls are proud to be all jolie laide, yearn to emulate Charlotte Gainsbourg, take to heart Marcel Proust’s dictum that pretty women should be left to men without imagination.

I get why Ashlee Simpson cared.

But I wish that she didn’t. I really, really wish that I hadn’t. That I wouldn’t now, ever. And I wish, more than anything, that my daughter will never. Care about her looks, her face, her nose.

I wish this more than anything. That she not be Ashlee Simpson (on so many levels, but for now, let’s focus on this one.) And that, in this singular respect, she not be like me. That she not care.

I have two conflicting dreams for my daughter. In one, she inherits most of her looks from her father, who is smashing handsome with a fine straight nose and who is blessed, along with rest of his family, with some serious Dorian Gray reverse-aging genes. In this dream, she never has to give her looks a second thought. In this dream, she never wonders whether or not she is pretty because she is never plagued by the concern that she is ugly. She will be blessed with the luxury of having no need of concern over her looks. She will not have reason to care.

This is my wish for her, my dream. I’ll do everything in my power to make it real.

I’ll begin by loving my own beauty. 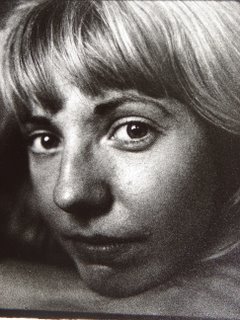