A couple of months ago, I made the following confession:

But she is not the Whole Me. She is not even the Whole Maternal Me. She’s just one part of that whole. She’s the part that I write about. She’s my blog muse. She’s a character. A true character, but still: a character, of a sort.

The real, whole me? You don’t know her. Not really, not fully. You know some very, very important parts of her – parts that had probably never really been fully exposed before she began exposing herself on this blog. You would recognize her if you ever met her in real life. You would recognize the self-deprecating humour, the over-functioning vocabulary, the hand-wringing, the bob. You would see Her Bad Mother in the whole me. But you would see so much more than Her Bad Mother.

I’ve been asked, by a couple of people, to spell out what it is exactly that you would see. You know, so that nobody gets a nasty shock at the BlogHer conference. The problem is, I don’t quite know how to put into words who the quote-unquote real me is. As I said in the confessional post that I cited above, the real me is a kind of shadow to the Her Bad Mother me who appears on this blog (and, the Her Bad Mother me a kind of shadow to the me that I am in real life) – we’re true but imperfect representations of each other. And the whole thing about these words on this screen that you’re looking at right now? They can only capture the shadow. It’s a deep shadow, with crisp outlines, but it’s nonetheless a shadow. (Am resisting, with difficulty, an urge to launch into a lecture on Plato’s Allegory of the Cave, one that would draw parallels between his cave-city and the blogosphere blah blah blah. Am. Resisting.)

So I could tell you more about how I love martinis and chocolate and about that time I was held against my will on a Greek Island and about how people used to tell me that I looked like Kimberly on Diff’rent Strokes but also Molly Ringwald and how I much preferred the comparison to Molly Ringwald, especially after Kimberly became a drug -addicted felon. But that would still only serve to round out the corners of the shadow, sharpen the edges further. It would tell you more about Her Bad Mother the writer (what am I choosing to reveal? How am I framing my anecdotes? How am I characterizing myself?) but not necessarily a whole lot more about the woman behind Her Bad Mother.

If you want my stories, you can tour my archives, or the ‘Best Of’ list on the sidebar at your right. If you want my formal bio, you can check out BlogHer’s speakers page and scroll down to the C’s. If you want to see and hear the real me, mediated only incidentally through the character that is Her Bad Mother, you could check out my AlphaMom interview, which is being debuted today on the AlphaMom site. It’s about as real as it gets on the screen – witness LeahPeah’s sweet genius at drawing out an interviewee’s thoughts and feelings – without the benefit of alcohol (for me, not you. I’ll only become fuzzier if you’ve been drinking.) It was filmed during last year’s BlogHer conference, when I was still so new at being a mom, and a blogger, and before I’d figured out that I should sometimes censor myself. You’ll even hear WonderBaby’s real name.

(For the record, I am no longer engorged. Disregard that portion of the interview. Thank you.)

That’s the best that I can do. I hope that if you are coming to BlogHer, and if you do meet me, I don’t disappoint. The rest of you, I hope that you get a sense of the real me through the bits of shadow flickering upon this screen. You’d like me, I think. I hope. 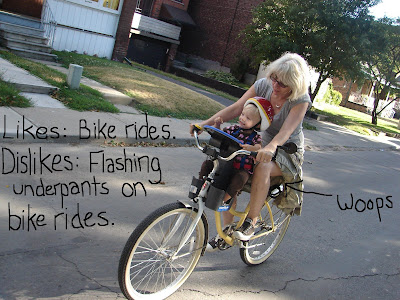 The fantabulous MochaMomma is once again urging BlogHers to introduce themselves, share a little more than they ordinarily, in advance of the big meet-up next week. I’d like to second them on this, but I’d also like to do something further – I’d really like to hear from those of you who aren’t attending. I’ll get a chance to get to know the attendees better, many of them, but I’m feeling keenly, already, the missed opportunity with so many of you others.

So, please, even if you are not attending BlogHer – especially if you are not attending -do participate in BlogMe. Write a post telling us little bit more about yourselves. Because we want to know. Because we will be talking about you, missing you, next week. Sharpen up the corners of your shadows for us, the better for us to imagine you there. Link back here and/or leave a comment so that I can find you, and I’ll do up a Wish You Were Here list next week, before we leave.