Wonderbaby has always been, shall we say, follically challenged. Sparsely-haired. So much so that that we were asked, more than once during her first year, whether we shaved her head. (For the record: no.) Since her first birthday it has been coming in – surely, but very slowly – and although she now has a thickish mop of fluffy flaxen hair, it is nonetheless a very short mop. Short, that is, except for the bangs. Wonderbaby’s meagre coif is entirely pixie, except for the long flip of fringe that has been dangling over her eyes for some weeks now. We haven’t been quite sure whether the look is more Pob or Donald Trump, but whatever the case, it was starting to obscure her vision and get in her soup and so, we decided, it needed a trim.

So it was that although it has long seemed unlikely that she would be getting her first haircut before her second birthday, she received, yesterday, just shy of twenty-two months of age, her first set of proper bangs (the first of many, if she is anything like her mother). Behold the Wonderbaby makeover! 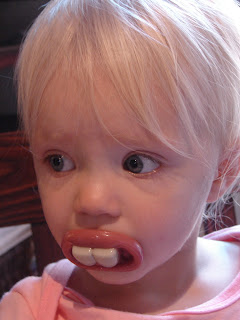 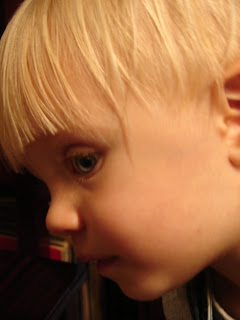 Anna Wintour bleached and shrunk and forced to visit SuperCuts.

And so it begins. Tomorrow she will insist upon wearing a black trenchcoat and oversized Gucci sunglasses and will refuse to do interviews. Then, I suppose, I will have start calling her Wondergirl.

(In the meantime – giving shit away! HERE! First time ever! Am capitalist whore with potlatch complex!)