Stories I’ve Only Told My Mom

I think that Mother’s Day is as good a time as any to break out the heavy emotional artillery, don’t you?

But that struggle – that is, my personal experience of that struggle – is one that can, most of the time, be compartmentalized, tucked away on some back shelf of the psyche and forgotten until some event – pregnancy, say, or miscarriage, or one’s own mother’s admission of having given a child up for adoption – prompts one to go rummaging around on the shelves of Buried Hurts and Ambivalent Regrets and Things That I’d Rather Not Think About Unless My Sanity And/Or Moral Stability Depends Upon It. My mother’s struggle with her longstanding conflicting emotions around having given up a child for adoption is not – has never been – something that she can just tuck away on a shelf and forget about. She has never passed a day, she told me, without thinking about her lost boy – without looking at the faces of strangers who seem about his age and wondering is it him, without reading in the newspaper or hearing on the news something about any male person of his vintage and wondering is it him, without casting back to that baby in the blue blankie and wondering what became of him what became of him what became of him?

Because it is not so simple. It is not nearly so simple.

That’s from an essay that I wrote (developed out of a post that I wrote a couple of years ago) for an anthology of essays on the theme of stories that I’ve only told – or have wish I told – my mom. Mine fits kind of awkwardly, because it’s not really about a story that I only told my mom – I kind of told the whole Internet – nor about a story that I didn’t tell my mom – the whole discussion that this piece emerged out of was a sharing of stories – but it does address the whole question of what it feels like when we do share our stories but then edit out some of our feelings. My mom knows this story. She doesn’t know the depth and breadth of my confusion about this story. Although maybe she does now. Hi, Mom!

Anyway. Mine is not the only story here. Not all of them are so heavy, either. You might even laugh some, which, you know, is always nice. 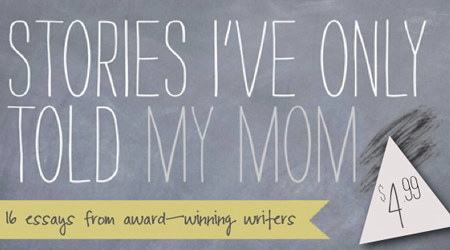 There are amazing essays here from Laura Mayes and Cecily Kellog and Meagan Francis and Jane Roper and Katie Granju and Heather Spohr and a bunch of other really super talented writers in whose company I am honored to be. So, yeah. It would make an awesome gift for, I don’t know, a mom, maybe? Maybe on one of those holidays where moms are celebrated? I can’t think of one just at the moment, but you know what I mean. You can buy it/download it here.

(I leapt into the dark, dark world of e-readers just for this, you know. That’s how compelling this book is.)

(Don’t forget to make a dedication to a mom that you love, over here at the mothers2mothers Tree Of Hope. Because, this.)

(Speaking of moms, my own assures me that she is going to live, if only so that I can support her in grand style and take her on holidays and stuff. So. I’m going to hold her to that.)

Mothers Day, Before And After

Ode To A Mother, Who May Or May Not Be Me