Seven Things I Learned On My Winter Vacation

Oh, hey. Remember me? I used to post to this blog.

I haven’t posted since last year, which sounds terrible when you say it out loud, but of course it’s only been eleven days since last year, so it’s not that bad, really, until you realize that eleven days (plus whatever number days passed between my last post of 2012 and the New Year; let’s not count those) is actually eleven months in Internet time. Which is to say: I’ve taken slow blogging to a new, totally inert level.

1.) The horizon is an amazing thing.

I’d never been on a cruise before. I’d never really been interested in cruises, in part because the very idea pushed all sorts of claustrophobia buttons: you’re confined to a ship with all these other people; there’s no way out, except straight down into the deep; you cannot escape! But here’s the thing: being at sea is being in a state of always orienting yourself toward the horizon. The infinitely blue horizon. Which is to say, it is all space. There is you, and there is the sea, and the sea stretches out to the sky. And apart from those times when you are nearing or departing a port – or when you can see Cuba in the distance – that is all you can see. Limitless blue. Looking at it is like looking at a clear night sky, full of stars: you kind of can’t help but get lost in it. In a good way. I’ve never been much for meditation – my head is very committed to being busy – but sitting and watching the blue was something very close to meditative. And one of my commitments to myself in the new year is to look for those horizons wherever I might find them, and take the time to fall into them. 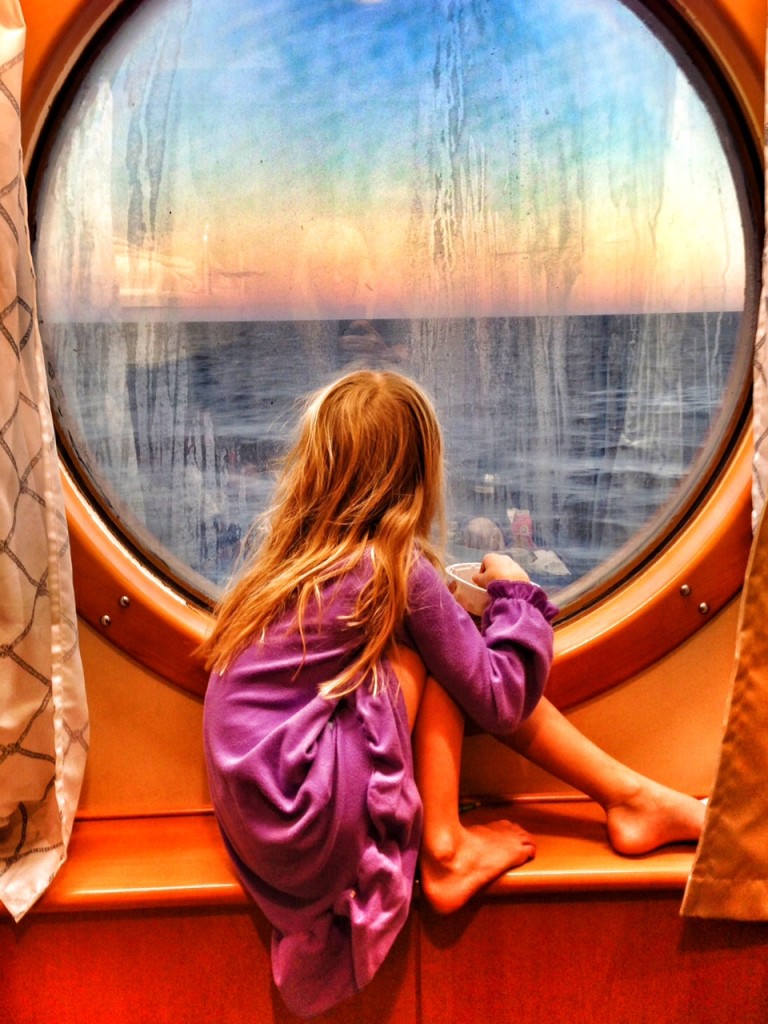 That is to say: the world keeps turning, the sands keep falling through the hourglass, the tides keep moving, the continents keep drifting… even when we are at our most still, our most inert, we are still moving. There is no such thing as FULL STOP. It’s easy to remember this when you’re at sea, sitting still on a deck chair, watching the sea go by. You’re still, but you are nonetheless en route, getting closer to whatever destination is next. Maybe I’d drunk too much tequila when this thought occurred to me, but whatever: we have many destinations that we’re traveling toward, arriving at, moving on from. Life is a journey, blah blah blah. But it’s too easy to get caught up in thinking that because life is journey, we have to keep moving, keep racing forward, keep ahead of schedule, move. And that’s just wrong. We can stop. The journey doesn’t stop because we pause to catch our breath and look at the horizon. The journey is ongoing, whatever our pace. So it’s okay to just slow down.

Or: slow is an adjective, and also a verb. Which is just another way of saying what I said above: moving forward is not always about speed. ‘Slow’ is an action. It is a meaningful action. Your journey doesn’t always require you to move at a rapid pace. Sometimes (as, say, on a cruise) it doesn’t require you to move at all. I got further ahead in my reflective work – personal and professional; figurative and literal – sitting quietly on deck chairs for seven days than I generally do in seven weeks – seven months, even – racing around New York City and Los Angeles. By slowing down, I was able to let my mind saunter and wander, rather than race and scurry, and you discover so much when you saunter and wander.

I need to find more time for slowness in my life. 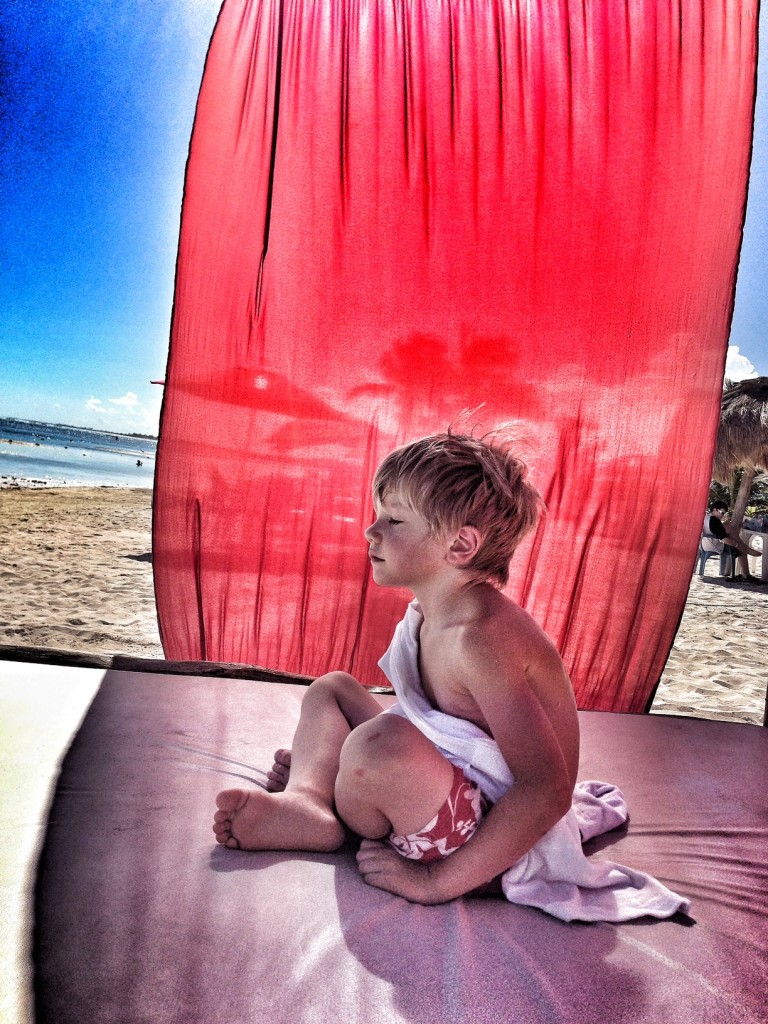 We were on a Disney cruise, and I am – as we say – a ‘Cast Member’ of the Walt Disney Company. But I didn’t tell anyone, not even in passing. I didn’t talk about my work – as EIC at Disney Interactive, or as the author of this blog – once. I took that cruise as a guest; I was there as me, Catherine, wife/mother/vacationer, and not as an executive or as a writer or as an digital media ‘brand.’ I was just me. Which was a little disorienting in some early moments – I’m so accustomed to comporting myself within the context of one of my professional identities that it was difficult to not posture, to not frame the experience according to the lights of media sharing – but I adapted, and came to love it. Being me meant doing what I wanted, and not what would produce the best photos or anecdotes; being me meant not framing every experience with the context of a narrative (which is not to say that I don’t still think that ‘narrating’ one’s experiences don’t add a layer of richness, just that it was liberating to not do it, for a while. And being me meant just being Emilia and Jasper’s mom, and Kyle’s wife, and that woman over there with the book, enjoying her solitude, because goddamn it can be nice to just be by one’s self sometimes.

By which I mean, it’s nice to be disconnected. It’s nice to not think about who’s trying to reach you, what conversations are happening on Twitter, who’s commented on your blog, whose e-mails you’ve neglected to answer, what discussions you should be part of, what’s happening that you should know about, have you updated your Facebook status today, have you updated your blog this week? There’s a lot of noise in the digital space. It’s hard to shut off that noise. Even if you set yourself policies, as I do, about not checking email or social media between certain hours or in certain situations, the noise is still there, in the background, pressing against you, demanding that you turn back to it and give it its due. Shutting it all down, more or less entirely, for over a week was tremendously freeing, because when you know that you can’t turn to it, it – the noise – kinda just goes away. For a while. It was nice.

There are lots of things to do on a cruise, a Disney cruise especially. There are pools, there are shows, there are shops, there’s a spa, there’s ping pong, there are movies, there are restaurants, there are ports of call to explore – and that only scratches the surface. You can completely avoid stillness, if you want (I, obviously, didn’t want.) And you can busy yourself, and your children, with all variety of ‘virtuous’ activities – crafts and science experiments and dancing and swimming and quality time. Or, you could go to the video arcade, and play Moto Racer, or air hockey.

Emilia, of course, really, really wanted to spend time in the video arcade, in large part because I didn’t want her to spend time in the video arcade. It’s a cruise! We should be swimming! Or dancing! My inner overfunctioning mom recoiled at the idea of spending any time on a sunny day at sea, on our vacation, in a video arcade. But you know what? The couple of times that we did – because I am weak, and Emilia pled – we had a blast. Sure, it’s silly, mindless fun, and there were other more enriching things that we could have been doing, but it was fun, and no day ever suffered for having ten or twenty minutes of its time devoted to silly mindless things. And, it turns out, Emilia is a kick-ass air hockey player, so.

I’ll always prefer to be behind the camera, rather than in front of it. And I’ve always disdained conventional, ‘posed’ family portraits for being contrived. The true visual story of a family – the authentic visual story of a family – is best captured in movement, right?! But as I’ve said repeatedly here: stillness has a value, too, and posing is just enforced stillness. It’s taking a moment to say stop, look, smile – and then holding, and capturing, that pause. It’s stopping and making a declaration –  here we are, here is us – and meeting the gaze of the unknown viewer as we make that declaration.

So. Here is us. Here we are, paused, enjoying the moment of pause as we continue along, moving, ever moving, chasing the horizon. 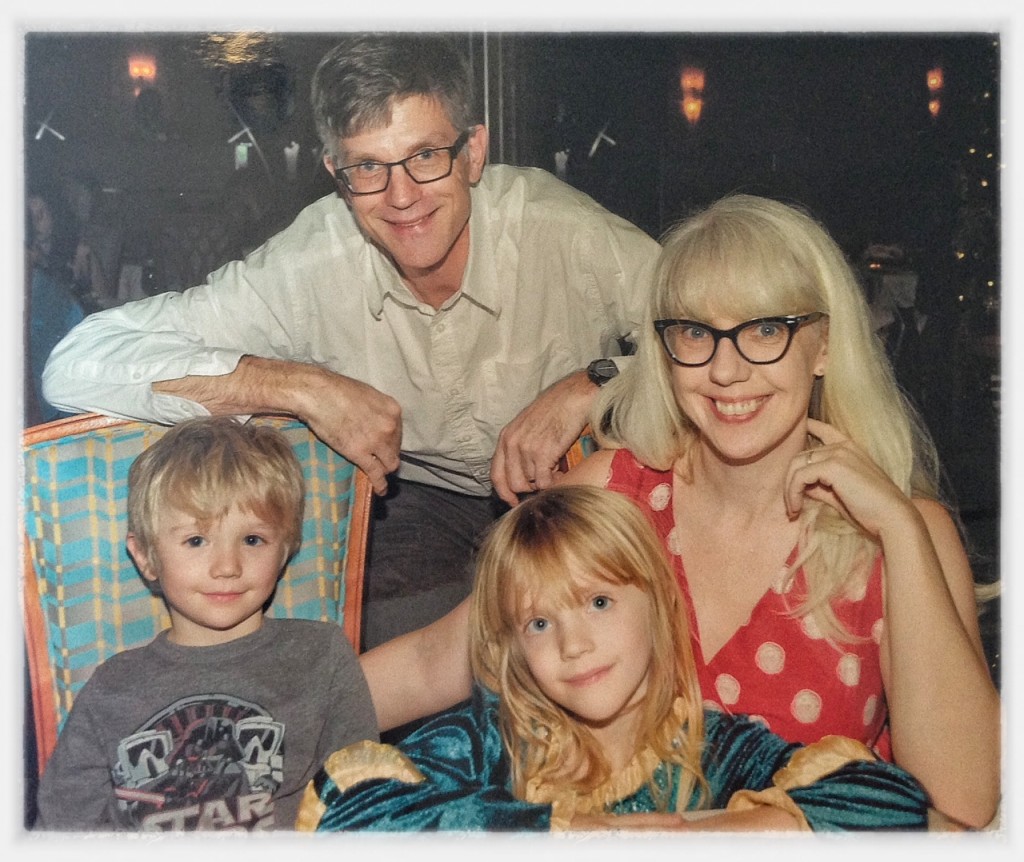 Happy New Year, all. May you find stillness/slowness/movement/us-ness this year.